Lord of the spear?

Carnivorous
Ubirajara is an extinct genus of compsognathid that lived in Brazil during the Early Cretaceous.

Ubirajara is known from a single specimen, which preserves an array of hard-to-fossilize material such as feather, keratin, adipocere and epidermal structures. This genus has a large feather "mane" which starts midway down the dinosaurs back and covers the remainder of the body in a thick layer. Most dinosaurs that preserve vast arrays of feather and similar structures are usually maniraptoriformes and small ornithischians. Ubirajara represents the first non-avian theropod preserving filamentous integument.

Ubirajara is also the first non-maniraptor to possess elaborate structures likely used for display. In this animals range of integument include slender monofilaments at the base of the neck, which increase in length to the dorsal thoracic region forming a large "mane". Additionally, Ubirajara bears large ribbon-like filaments that likely sprout from the shoulder. Such structures are unknown in any dinosaur, until now. However, similar structures appear in the extant genus Semioptera. It has been suggested that said "mane" and filamentous structures in Ubirajara could have been pushed upwards/outwards by muscles during display season, This means that the base position would have the structures tucked into the body, and then shot out when needed.

Ubirajara was originally discovered in Brazilian fossil mines, to which author David M. Martill bought and exported the specimen from South American museums. Brazilian fossil laws state that fossils are considered property of the state, which therefore makes selling and exporting illegal, and if it is exported, requires at least Brazilian researcher to work on the specimen. This researcher has used similar methods before, notably with an exquisitely-preserved Brazilian snake fossil holotype specimen; Tetrapodophis. Since publication, it has been argued that the specimen should be transported back to the museum the fossil was to be originally brought to and further studied by Brazilian paleontologists. In the past, when questioned about unethical fossil handling, the researcher has said this about Tetrapodophis and similar specimens:

—Martill (when asked about partnering with Brazilian scientists)

After that interview, he closed with a reference to Sir Richard Owen digging bodies from graveyards to study human anatomy during the 1800s, in an attempt to justify his actions. Since then, #UbirajaraBelongsToBR has trended on Twitter in an attempt to repatriate the fossil. Ubirajara is not the first fossil to be illegally smuggled from Brazil, as the case for several undescribed remains from museums.

However, researcher Eberhard "Dino" Frey has told may users Email that the holotype was exported legally, citing documents written in Portuguese. After further analysis, it is determined the documents appear to be genuine, and roughly state the following:

—Rough translation of the legal documents

They state the limestone fossils are "of no commercial value", which is a statement challenged by numerous evidence, and even the existence of an illegal fossil trade based on currency. Frey also states the team was to have a Brazilian member, who was kicked due to false documentation. This contradicts Martill openly admitting that he had not, and will not be working with a Brazilian, as Brazil's fossil laws cite as a necessity. Frey has not elaborated further on this unnamed team member. He continues to message people over Email, in one case, addressing a user with this response:

—Part of Frey's response via Email

He states clearly the fossil is in a better state exported, focusing the blame on a Brazilian museum that burnt down on September 2, 2018, and was not repaired despite the government knowing about the state of the building. Further looking-into shows the person who signed the documents is notorious for forging documents, and has various lawsuits against them. The text on the documents contradict previous statements, such a similar situation concerning fossils from the same locality of the Ubirajara holotype. The holotype was likely removed during the 1990s, with no legal authorization. 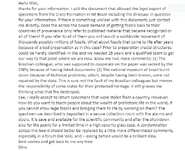 An Email sent by an anonymous user.

Frey replying to a user.

The Ubirajara holotype.
Add a photo to this gallery

The Brazilian Society of Paleontology removed the naming paper from air until the issues were resolved. The documents provided have been disputed, although they grant the study and naming of exported remains for up to 20 years. It has been brought up that the naming team has worked with Brazilian fossils and is familiar with local laws, but has failed to meet the basic expectations layed out by Brazilian authority. At least 10 procedures in the last 7 years have been enacted to attempt to control the illegal fossil activity in Brazil, with little success. This account for upwards of 46 specimens, including rare finds such as pterosaurs and other finds worth almost 2.5 million in total. The court ruled for the repatriation of the finds, which many argue should be the same for Ubirajara, if not more due to the contents of the specimen. Like many priceless fossils sold in auctions and circulating on the fossil market daily, the Ubirajara holotype represents a fraction of smuggled fossils worldwide. Because of this incident, Brazilian authorities need to invest in improving museum infrastructure, training staff and becoming more aware of illegal activity.

Credit: @ildarotyrannus on Twitter
Add a photo to this gallery

Retrieved from "https://prehistoric-wiki.fandom.com/wiki/Ubirajara?oldid=18814"
Community content is available under CC-BY-SA unless otherwise noted.